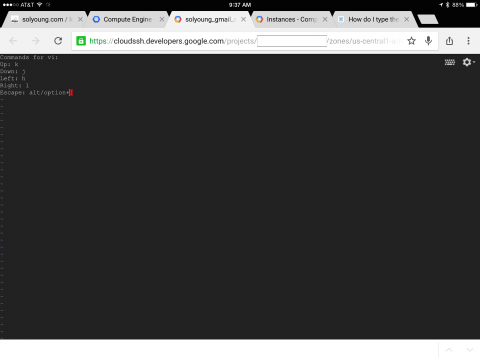 I’ve been playing around with Google Compute Engine and setting up a development environment on my iPad. A requirement for the sysadmin side of the process is vi. From a terminal app on a Mac or PC, this is cake. From the web-based SSH client on an iPad, you have to use the old school keyboard commands instead of the arrows, ESC, and TAB. I use this Zagg bluetooth keyboard case.

I’ll probably cover the complete dev setup in another post, but if you’re curious here’s a summary:

– Server admin and Apache/Node configs: Open the Compute Engine instance in the web and open the web-based SSH client.

– Code versioning and repositories: A server is sync’d with Dropbox and file changes trigger a git commit and push to GitHub. Merges and branch changes are done via web-based terminal.

– Continuous Integration: After GitHub commits, an HTTP POST is automatically sent to the deploy server. It retrieves and applies the applicable version from GitHub. (note: I may switch to Chef, but for now this “just works”). 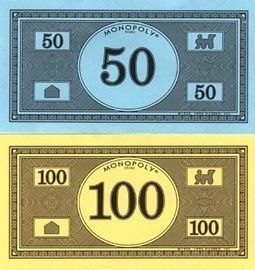 The criminals probably didn’t realize that they were installing their ATM in a hotel that was soon going to be flooded with more than 8,000 security professionals.

Good points by Gary North on how to market yourself as an author and the basic steps of getting your first book in to print:

Book publishing is getting expensive. Profits are way down. Readership is declining for printed books.

If you have something to say, blog it. After a few years of blogging, write your first book. You will have an audience.

If your blog does not attract an audience, neither will your book. Publishers know this.

Bottom line: Start a blog and prove you can attract an audience… If you’ve got traffic, you are infinitely more likely to get your book published.

Gary’s full post is, So, You Want to Write Your First Book. Here Is How to Do It.

Mike Arrington of TechCrunch claims he is quitting his iPhone as soon as he can port his number to Google Voice. I don’t think he realizes someone could have a web app that solves the Google Voice and iPhone interaction within days.

We don’t need a full blown Google Voice application on the iPhone. A simple web app would do. In fact, it would probably be better for overall adoption because only a small percentage of people update their apps religiously.

Given Google’s API for GV, and the speed at which the native apps were developed, this isn’t a stretch. A couple decent web developers could get this launched by Monday… In time to save Arrington and the world from an unnecessary rant on the failings of Android.

I made the jump from the iPhone’s included mail application and may swap out the Phone app for a Google Voice web app later, too. The above image is my iPhone dock. Sean McKeever on Facebook asked how I get notifications for new mail being received. Here’s how I do that…

First off, with the iPhone Mail app I never used new mail notification. There’s just too much email every day and having notifications on would turn the phone in to a jumping bean. The little counter of unread messages is nice, of course.

That changes with Gmail and filters. One can receive customized notifications via SMS of new messages based on sender, subject, account, or any other attributes.

This nicely sets up important alerts if you need them. I use these for messages I need to know about immediately… Typically messages sent directly to me and sent from somebody important.